Bob was elected into membership in the Keystone on October 4, 1973. Bob served the Keystone and this community for 47 years. Prior to moving to Myerstown, Bob provided approximately 20 years of service to the Schaefferstown Fire Company. His service in our community also included more than 30 years with the Myerstown First Aid Unit. Many, if not most of those years, as an Officer in the organization. Bob was awarded Life Membership to MFAU in 2006.

Bob was appointed to the first Junior Firefighter Committee in 1978. This committee organized the program for 14 and 15-year olds to join the Keystone. He served on this committee from 1978 to 2012.

In addition, Bob also served on the following committees to purchase apparatus:

Bob was still an active member of the following committees until his passing:

In 2000, Bob was award Life Membership with the Keystone. He became our 22nd Life Member.

Bob’s involvement in the fire service was more than just here in Myerstown. He was very active in the Lebanon County Firefighters’ Association. Bob went through the Vice-President Chairs in the Association and was elected its President in 1981. For several years he served as the Trustee of the Association for our sector. The County Association awarded Bob the Executive Citation in 1988 and the Distinguished Fire Service Award in 1996. He served as a Trustee for the Association for many years, stepping down from that roll in June of 2017.

But a review of Bob’s activities and accomplishments is just a piece of his story. Once you met Bob, he was your friend. Many of us shared a lot of fun times with him over the years. Bob had a somewhat quiet leadership style. He would let you know when you did a good job. He’d also let you know when you screwed up but encourage you how to do it better next time. You valued Bob’s experience and respected his opinions.

Bob faithfully attended and participated in our monthly Company meetings. Rarely did he miss a meeting. He understood what it meant to be a Volunteer Firefighter. Not just being here when the alarm sounded, but supporting the organization with his time and talents whenever possible.

Rarely did Bob miss a Keystone work detail or fundraising activity. Bob did a lot of the little things around the firehouse, at work details or at fundraising activities that may go unnoticed. Such as, trimming the firehouse bushes, mowing the grass strip or washing dishes at our annual golf outing just to name a few. Well Bob, we noticed! We also noticed the sugary, gooey syrup on the front of your shirt when you carried in the hot trays of Mr. Sticky buns.

As you can see, Bob’s passing leaves some huge shoes to fill here at the Keystone. Just as others before him, Bob helped to mentor many of us through the years. Hopefully we’ll all be able to follow the example he set for us by stepping in to serve where needed, sharing our knowledge and experience with others, while also remembering to have some fun along the way.

Thanks Bob, for a job well done!

This was your father, this was our brother and our friend! How lucky and blessed we were to have been a part of his life!

Peace Be With You All!

94 entries in the News 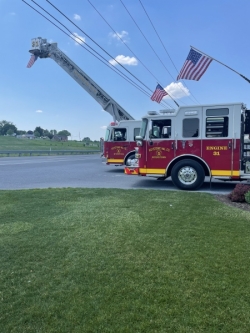 The Keystone came out to support the annual Ride for Wise.  Michael Wise was killed in a LOD in 2004 as a police office for the City of Reading.  He was a Lebanon County native and lived in Myerstown at the time of his death.  The Rise for Wise is one of the fund raisers for the Michael Wise II Foundation.  The ride begins at the Reading Area Community College, passes his grave site, and ends in Cleona. 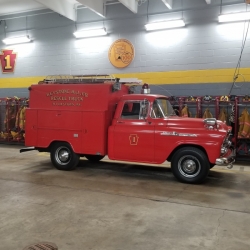 The Keystone's first rescue truck was purchase back by the Company at our May 2021 meeting.  It remained in service until January 1, 1982 and then sold by the Keystone when we purchase our second rescue truck.  It had been privately owned by a few owners over the years but lastly by Keystone member Michael Yiengst.  It is good to have it home at the Keystone.

2020 Firefighter of the Year 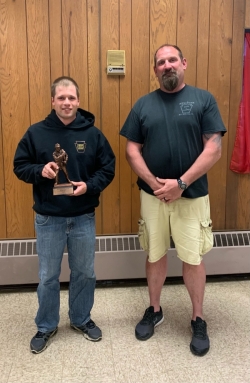 Wilson Martin was awarded the 2020 Keystone Firefighter of the Year at our May 2021 Company meeting.  Presenting the award to Wilson is Chief Belleman.

2019 Firefighter of the Year 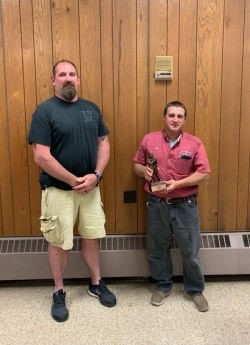 Mike Martin was awarded the 2019 Keystone Firefighter of the Year at our May 2021 Company meeting.   The award was not presented last year due to covid  restrictions.   Presenting the award to Mike is Chief Belleman.

The Keystone regrets to announce the passing of Robert A. Meyer, Sr.

Bob was elected into membership in the Keystone on October 4, 1973. Bob served the Keystone and this community for 47 years. Prior to moving to Myerstown, Bob provided approximately 20 years of service to the Schaefferstown Fire Company. His service in our community also included more than 30 years with the Myerstown First Aid Unit. Many, if not most of those years, as an Officer in the organization. Bob was awarded Life Membership to MFAU in 2006.Here at the Keystone, Bob has filled many roles ... 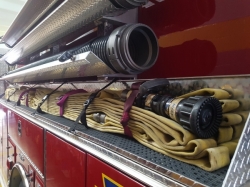 Wagon 31 Gets an Upgrade 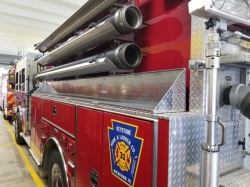 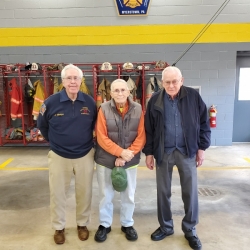 We were fortunate to have 2 other Keystone members that had received emeritus awards in the past present to help honor Lee Smith when he received the Treasurer Emeritus award.  On the picture from left to right is Larry Mentzer, President Emeritus; Fritz Shaak, Fire Chief Emeritus and Lee Smith, Treasurer Emeritus.   Thank you to all for your many years of service to the Keystone. 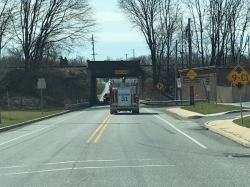 Our 1992 Mack engine was sold to a forest fighting unit in Virginia.  It was picked up on Saturday morning,  March 14, 2020, and driven back to Virginia.  We are very sad to see it go but very glad that old Engine 31 will continue its fire fighting career in Virginia.   It served the Keystone H & L, Jackson Township and  the community of Myerstown very well.  At every major fire over the past 28 years, you could find Engine 31 looking like an octopus with hoses ... 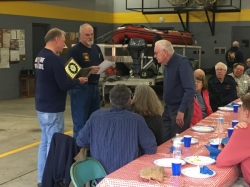 On March 14, the members of the Keystone Hook & Ladder Co. # 1 of Myerstown  honored Lee Smith for his dedication to the Keystone by awarding him the Title of, Treasurer Emeritus.  Lee was joined by his wife and family. Lee became a member of the Keystone on December 6, 1956. As of this past December, Lee has been a member for a total of 63 years. Lee’s fine mind for dollars and numbers as an accountant has been a true blessing for the Keystone. In 1958 Lee was elected F... 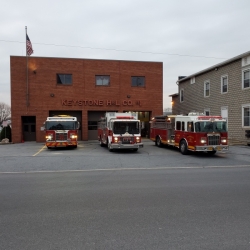 Pictures were taken of our 3 pumpers together prior to the 1992 Mack engine leaving  town.   It was sold.   More information coming. 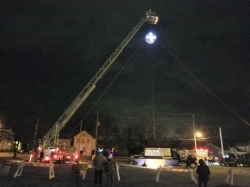 Members from the Keystone again help during this year's  New Years Eve celebration in Myerstown hosted by the Myerstown Activity Network and lowered the Bayer Aspirin at midnight using Truck 31.  Hope everyone has a GREAT 2020! 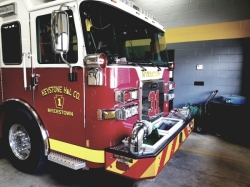 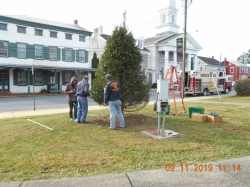 Members took some time on Saturday morning ( 11/9) to put up the lights on the community Christmas Tree.   There will be a tree lighting ceremony on November 30th after the Holiday Parade. 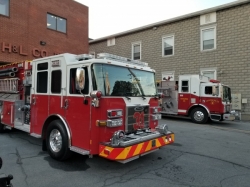 Our new Engine was picked up today by Firefighter Tom Stauffer,  Asst. Engineer Dave Mason and Asst. Engineer Glenn Martin from Glick and bought home to Myerstown.   A lot to do to get it into service but excited to have it home. 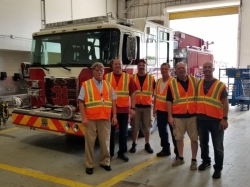 Asst. Engineer Glenn Martin, Lt. Kyle Stauffer and Asst. Chief Mike Shaak traveled to Bradenton, Florida on August 21 thru 24 for the final inspection of our new Pierce Saber engine on the Gray Floor.  Allen Civita and David Civita, originally from Myerstown and members at the Keystone Hook and Ladder and now both career firefighters in Florida, met us for the final inspection.  The engine is currently ready for shipment to Glick but is inside and safe at the Bradenton Pierce Plant wea...

The Keystone hosted the 95th Annual Convention of the Lebanon County Firefighters’ Association on Friday, June 16th and Saturday, June 17th.  The Keystone's Officers and Members would like to thank everyone that helped to make the event a big success which included but not limited to the many volunteers, the numerous county and out-of-county fire companies that participated in the convention and parade, Myerstown First Aid Unit, Goodwill Fire Police and ot... 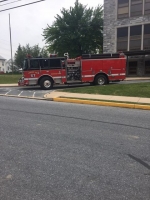 Thank you to Lancaster County Engine 67 (Rohrerstown) and crew for standing by for Station 31 on Saturday, June 17 during our hosting of the Lebanon County Firefighter's Association Convention and Parade.

Keystone's Orignal Hand Drawn Pumper Back in the Engine Room

Hand-drawn Chemical Hand Pumper  One of the first 2 pieces of Keystone equipment given to the company in 1875 by the citizens of Myerstown is back in the firehall ready for the County Convention.   It is normally on loan for display at the Lebanon County Historical Society.

94 entries in the News

Copyright © 2006-2021. YourFirstDue Inc. All Rights Reserved. Designated trademarks and brands are the property of their respective owners. Content on this web site is supplied by Keystone Hook and Ladder Company No. 1. YourFirstDue Inc. cannot be held responsible or liable for any content, text, pictures, or any other media found on this web site. Maintained by the members and staff of Keystone Hook and Ladder Company No. 1.
Management Login
Powered by